It's a cloudy day, yet the skyline remains impressive, and from the top of this ten-story building in Manhattan the iconic red letters of the New Yorker Hotel's sign look like a caption, framing out the crisp point of the Empire State Building.

Most of the other buildings are empty, the city still shaking off its Friday night. People are groggy, downing giant cups of coffee and shaking off sleep, but in front of us the bees are already hard at work, searching for nectar in mysterious corners of the city below.

Two blocks over I see a possible source of forage; right at eye level to us there's a rooftop restaurant surrounded with planters of flowers. A waiter is silently inspecting carefully laid table settings, though the tables are all empty. I wonder if he knows what we are up to over here. I decide not to wave hello when he glances in our direction.

We look like a team of Imperial Storm Troopers from a Star Wars movie, with our white suits and faceless mesh masks. Supposedly this will help us stay safe from the bees, who are instinctively predisposed to sting intruders who look like bears with eyes, ears and mouths. I like the protection, but hate that I lose most of my peripheral vision. On the other hand, the costume forces me to walk slowly and deliberately, which is probably good for avoiding a crash with the beekeepers or their tools.

A special device called a smoker is placed on the edge of the roof and opened. It looks like a coffee can with a bellows and a conical nose on top. Andrew Coté takes a piece of burlap out, lights it, and places it inside.

Smoke is used to keep bee stings to a minimum when working a hive. Bees communicate alarm signals among themselves via pheromones, and the strong smell of smoldering burlap interferes with signals. There are theories that it also causes bees to ingest some of the honey they are storing as food for the colony – perhaps as an instinctive response to protect their stores in the case of a forest fire. Either way, a bee with a full belly cannot easily bend its abdomen to sting.

Some rural beekeepers use pine needles in their smokers, but those are hard to find ten stories up in a neighborhood of art galleries. Coté has learned to make an inventive city substitution, repurposing bags used by food retailers for coffee. Potatoes sometimes also come in burlap bags, but are to be avoided, Coté warns his students, since those crops are often sprayed with chemicals such as fungicides that can harm bees.

Coté stands out from the rest of this rooftop crowd since his bee shirt is khaki. But even without the color difference, he's as easy to pick out of the faceless crowd as the queen bees in the hives, since everyone waits for his direction before beginning a task. His apprentices hover around him, awaiting instruction. He's still worried about the hives that seemed to be struggling last week.

This is the first season they've put bees on this particular roof, and getting the new colonies established and strong is proving difficult. Approaching the first hive, he loosens the ratchet belt and gingerly inserts a metal hive tool underneath the lid, breaking the seal of sticky propolis which the bees use to glue the lid to the hive. Bees begin to emerge in great number, and the apprentice at his side carefully swirls a bit of smoke around as he and Coté both lean over and peer inside. The hives seem like patients spread out for surgery. There's a precision to the work, and calls are made for tools. Once opened, each of the hives' innards are examined and diagnosed.

"Shitty queens!" Coté sighs in disgust, leaning his gloved palm against the edge of the open hive. "Ugh! That guy gave me some shitty queens!"

Healthy queens are everything to a hive, since the colony of bees spends its life satisfying the needs of this singular leader. Coté doesn't reveal where this queen came from, but to get a new hive up and running, most keepers on the East Coast turn to apiaries in the southern states, and buy packages of bees from places like Georgia. These include a queen bee and attending female worker bees which are either shipped or picked up in person and then driven north in mesh and wood packages.

A queen is usually larger, and mostly brown, although spotting her among the 30,000 or more bees in a healthy hive can be challenging. Some keepers mark the backs of their queens with a spot of bright paint. Others say they have learned to find the queen by watching the workers carefully: those diligent female attendants always circle in a knot around the queen, fanning her constantly.

Coté points out to the crew that there is no queen in the first box he's opened. She may have died recently, and the workers have reacted by laying eggs which, if left to mature, will turn into massive numbers of male drone cells. These will need to be removed to make room for a new, strong queen and her eventual offspring. (In a normal healthy colony, only a queen will lay the eggs in the hive.)

The building where we work seems to be in the path of a helipad; a half dozen large helicopters fly over head in an orderly line and the echoes reverberate off the bricks all around us. The Hudson River sparkles below, and in between helicopter passes I can hear the bass notes of tug boats that are beginning to work the water, pushing barges into place along the piers. The city is waking up.

"Ew, God, this is funky," says one apprentice as he peers into another hive. "Something is going really wrong in here." Coté walks over to offer his assessment: another dead queen, more layers of drone larvae that will need removal.

As he climbed up to the roof this morning, Coté carried along two replacement queens and their attending worker bees – which were collected as they swarmed on Friday. One was found in New Jersey, the other in a schoolyard in Brooklyn. The swarm bees sizzle and hum inside ventilated buckets making a sound like steaks on a hot grill.

"These in here look calm, but those look impatient," says one apprentice, holding the two containers of captured swarms at eye level for comparison.

"They seem ready to get to their new home!" someone else agrees behind her.

Swarms often scare the hell out of people in this city, but beekeepers know that's when bees are at their most docile. There's a skill to capturing swarms, and a certain blend of showmanship and level-headedness needed to keep the bees happy as they are gathered for relocation to a new, pre-built hive.

"Half of handling urban swarms is figuring out how to get up there to do it," says Coté, who is often called in to help with swarms since he's president of the New York City Beekeepers Association. This city is an unforgiving landscape of glass, steel, powerlines, and constant traffic. You have to work with whatever resources you have in the moment. One time he had to flag down a guy driving a refrigerated beer truck and offer him fifty dollars to pull up under a swarm so he could climb on top and gather the bees quickly.

Sometimes he gets calls from the city engineers – those people you can see in hard hats climbing in and out of manholes and up and down ladders on busy streets to repair street lights. "They are pretty tough guys, and they are moving away from the problem, and I'm moving toward it calmly – it does kind of give you a certain sense of satisfaction."  >> PURCHASE A COPY NOW. 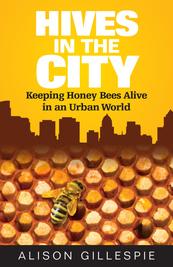 NYC Bee:
From the Rooftops of Chelsea
to the Bottom of Hell's Kitchen

All Rights Reserved.
© Alison Gillespie.
No portion of the following excerpt may be reproduced with out express written permission.